Beach sundal has different meanings for different people. Let me get to that in a while. But first, let s understand what exactly does beach have to do with Sundal?

Sundal is a dish that is made with dried beans in the Southern states of India. Sundal is also called as Usili in Karnataka.

You can make Sundal with pretty much any dried bean after hydrating it. There are umpteen ways to make this protein rich snack.

The most common ingredients in a Sundal are dried beans that are hydrated and cooked, coconut and a basic tempering with an ingredient like ginger to reduce flatulence.

Generally, all dried beans are gassy in nature and hence, its customary to add asafetida or ginger to reduce flatulence.

There s something magical  in beach sundal . It is called Beach sundal because its widely sold on the Marina beach, Chennai.

While the ingredients are the same everywhere, the taste is phenomenally different. Maybe its salty breeze or the blue and almost turbulent ocean or the lanky teenager who sells the sundal in a battered steel canister.

So the next time you are in Chennai, make sure you head to Marina beach and indulge yourselves in some Beach style Pattani Sundal.

If you are wondering what is this Thenga Manga Pattani, then let me bring you up to speed.

Thenga means coconut. This Beach sundal uses fresh coconut. While some people add finely chopped pieces of coconut, we can also use fresh coconut that has been shredded or grated too.

If you do not have access to freshly grated coconut or fresh coconut, then use frozen shredded frozen coconut after thawing it.

Make sure you use sour raw mango to make this Sundal.

I highly recommend using Thotapuri mangoes or Kizhimooku Mangai in this protein packed dish. These mangoes have a hint of sweet in them that elevates the taste of this Sundal.

Both white and green dried peas work well in this Beach sundal.

Can we use white or green peas in this sundal?

Yes, both varieties work well. Just make sure that the peas are not very old. Older beans take longer to cook and have a slight bite to them even after pressure cooking.

How do i use the Dried peas to make this beach style Sundal?

Wash and soak the dried peas for 6 to 8 hrs. Once done, drain the water used for soaking.

Combine the hydrated peas with 2.5c water and salt. Pressure cook for 4 to 5 whistles and release pressure naturally.

Can we use frozen fresh grated coconut to make Sundal?

You can use frozen fresh coconut after thawing it. To thaw frozen grated coconut, measure out the required amount and leave it in the fridge for 2 hrs or in room temperature for 20 to 30 mins.

I do not have raw mango. I m not able to source Thotapuri raw mango to make this Thenga Manga Pattani Sundal. What can i do?

If you do not have raw mango, you can still make this Beach sundal. Only, your sundal will not be Thenga Manga Pattani Sundal and it will become Pattani sundal.

If you are not able to source Thotapuri raw mango, use any raw mango that is sour to make your Beach sundal. If you are looking for more recipes that use dried peas or Pattani, then check out these recipes:

If you are looking for more Sundal ideas to serve during this Navratri, then check out these recipes: 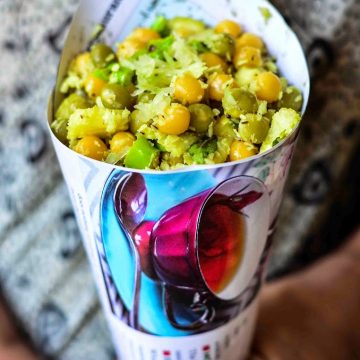 To Grind Together Without Adding Water