Home » Recipe Index » Ingredient Specific Dishes » Millet Recipes for a healthier lifestyle » Kuthiraivali Ven Pongal Recipe
Jump to Recipe Print Recipe
Millets are not new in India unlike the West.Indianshave been enjoying the goodness of millets since ancient timesandits not a big wonder that we are one of the largest millet cultivators in the world. While finger millet, foxtail millet and pearl millet are the most common millets in India, the lesser known millets such as barnyard millet, little milletandkodo millet are equally nutritious but have been ignored for a long time. These days, millet eating has gained momentum, thanks to the West. And indians have joined the band wagon too. I m no exception. Even though finger millet and fox tail millet are a regular in my house, kodo and barnyard millets are relatively new to me. When i began my hunt for these millets in Vadodara, i had no idea where i could find them. Only to be handed over packets of these to me by my grocer, those packets that had stared at me every single time when i had visited the store in the name of moriyo and kodri. Only i did not know they were gujrati names for barnyard millet and kodo millet respectively. Needless to say, i was overjoyed that healthier food options were at a stones throw from me. I began experimenting with these millets by replacing the rice in a recipe with them. And the results were nothing short of delicious. For once, we did not miss the rice and we ate without a shred of guilt about the carbs. This pongal or savory kedgeree is a fine example of how replacing rice with millets is not only a healthy but delicious option. So yes, do give a thought about including millets in your diet because they are not only healthy but also celiac friendly and delicious. 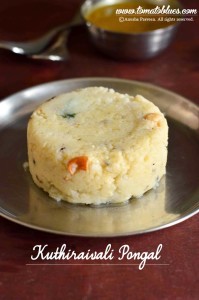 1. Replace clarified butter with oil for a vegan version. I recommend vegetable oil or canola for this.
2. You can cook this in an electric rice cooker or in a small pressure cooker directly.
3. Skip the hing for a gluten free version
Tried this recipe?Mention @tomatoblues or tag #tomatoblues!
Pin This RecipePin this recipe and save for later
« Drumstick Sambar Recipe With Step By Step Pictures
Avarakai ( Broad Beans)Poriyal Recipe| Easy South Indian Recipes »