Instant Pot Barley is something I have fallen in love with. Earlier, cooking pearl barley used to be such a long process. To be honest, this used to deter me from cooking barley. But now, the IP has changed all that.

You will find two types of barley commonly in the market- pearl barley and hulled barley. Hulled barley is whole grain barley. This is nutty brown in color and is considered more nutritious than pearl barley. However, it does not taste great. It is chewier and takes forever to cook.

If you want to include barley in your diet, then pearl barley is a good place to start. Even though pearl barley is considered not as nutritious as hulled barley, it is softer, slightly chewy, and tastes wonderful. Pearl barley also cooks faster. 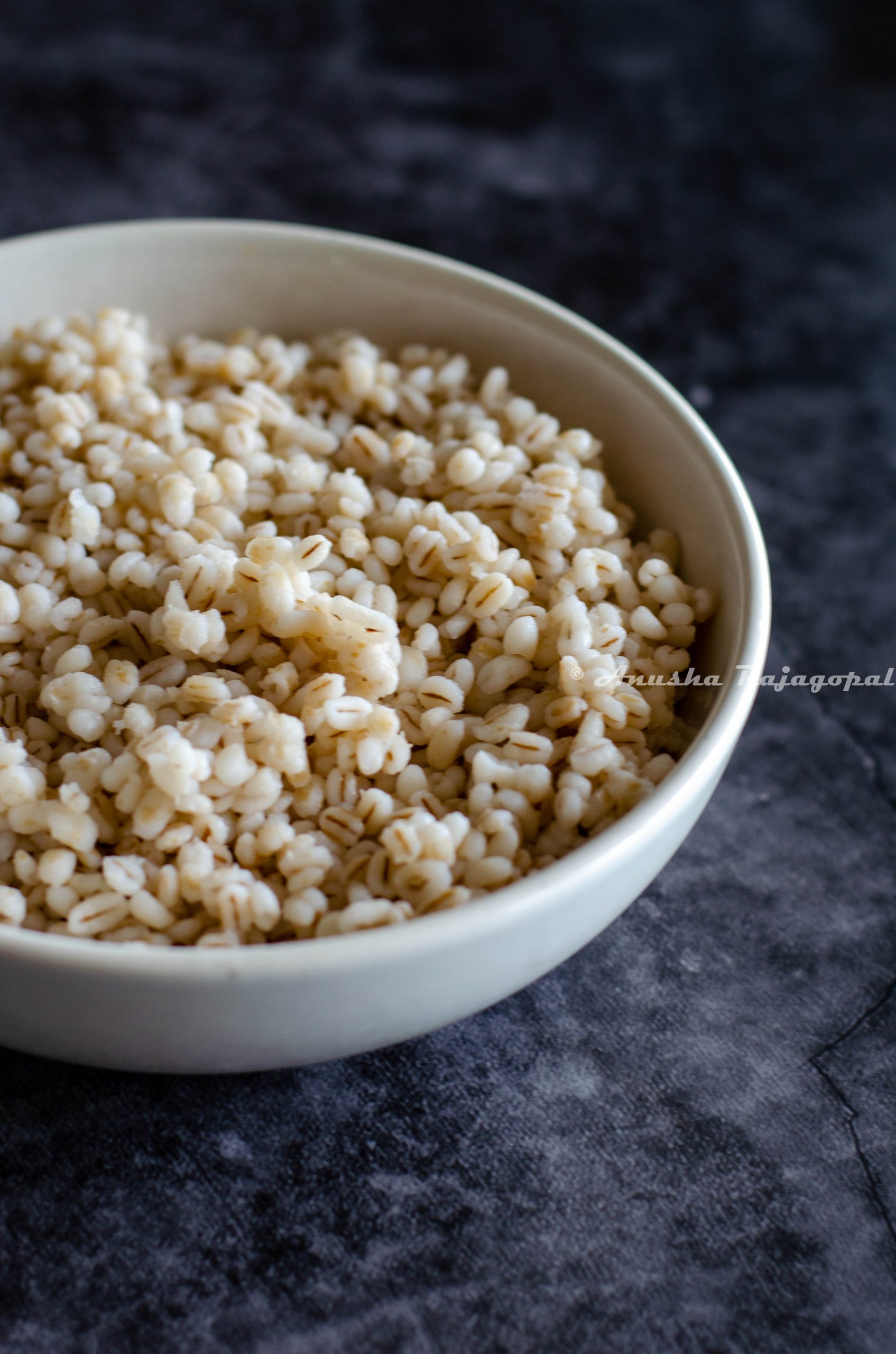 Unhulled barley is barley in its purest form. This is best for barley tea. Yep. Barley tea is a thing and is very popular in Korea.

Hulled barley- This is where the outer husk is removed and the bran is left intact. This is by far the most nutritious form of edible barley. However, this literally takes forever to cook.

Quick-cooking barley– Something similar to breakfast cereal, this is basically partially cooked and steamed barley that cooks instantly. Works well in porridges.

Barley grits- Think of them like corn grits. These are also processed to cut down cooking time and works well in porridges, soup and gruel.

Barley flour- I use this in my baking and add it to my everyday Roti dough too. You can check out my barley flour banana bread recipe to see the flour in action.

How to cook pearl barley in the Instant Pot?

Place the barley in a colander and wash it well. To the inner insert of your Instant pot, add the washed barley and water along with 1 teaspoon salt and 1 teaspoon cold-pressed coconut oil. Mix well.

Ensure that the sealing ring is in its correct place in the lid. Close the IP with the lid. Turn the valve to SEALING. Now switch on the PRESSURE COOK MODE ON HIGH FOR 15 MINS. 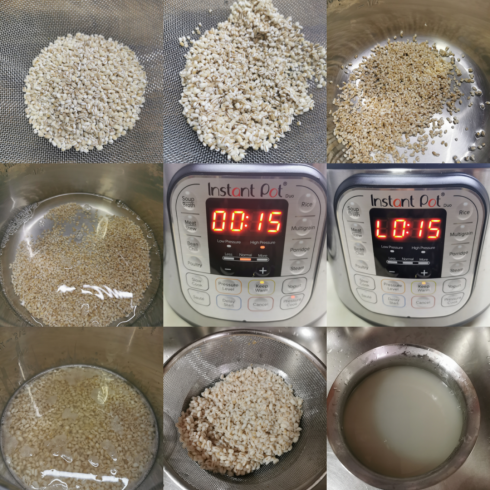 When done, strain the cooked pearl barley in a colander and reserve the water that you just drained. This is our homemade barley water. I will tell you what to do with it in my next post. Stay tuned.

How to cook pearl barley in a stovetop pressure cooker?

Place ½ c barley in a colander and wash it well. Combine the washed barley and 2 cups water. Add 1 teaspoon salt and 1 teaspoon oil. Mix well. Close the pressure cooker with a lid and put the weight on and cook for 5 whistles. Let pressure release naturally. Please note that in this method, you will not have any excess water.

Barley cooks like rice in the stovetop pressure cooker method.

How to cook pearl barley in an open pan?

Wash the pearl barley well. Combine the washed pearl barley, 5 cups water, 2 teaspoon salt and 2 teaspoon cold pressed coconut oil. Bring the water to a boil and continue to simmer for 40 to 50 mins or until the barley has cooked. To check if it has cooked, take a few grains of barley using a slotted spoon. Press them and if they are soft, then they are cooked.

When done, drain the cooked grains in a colander and reserve the water. 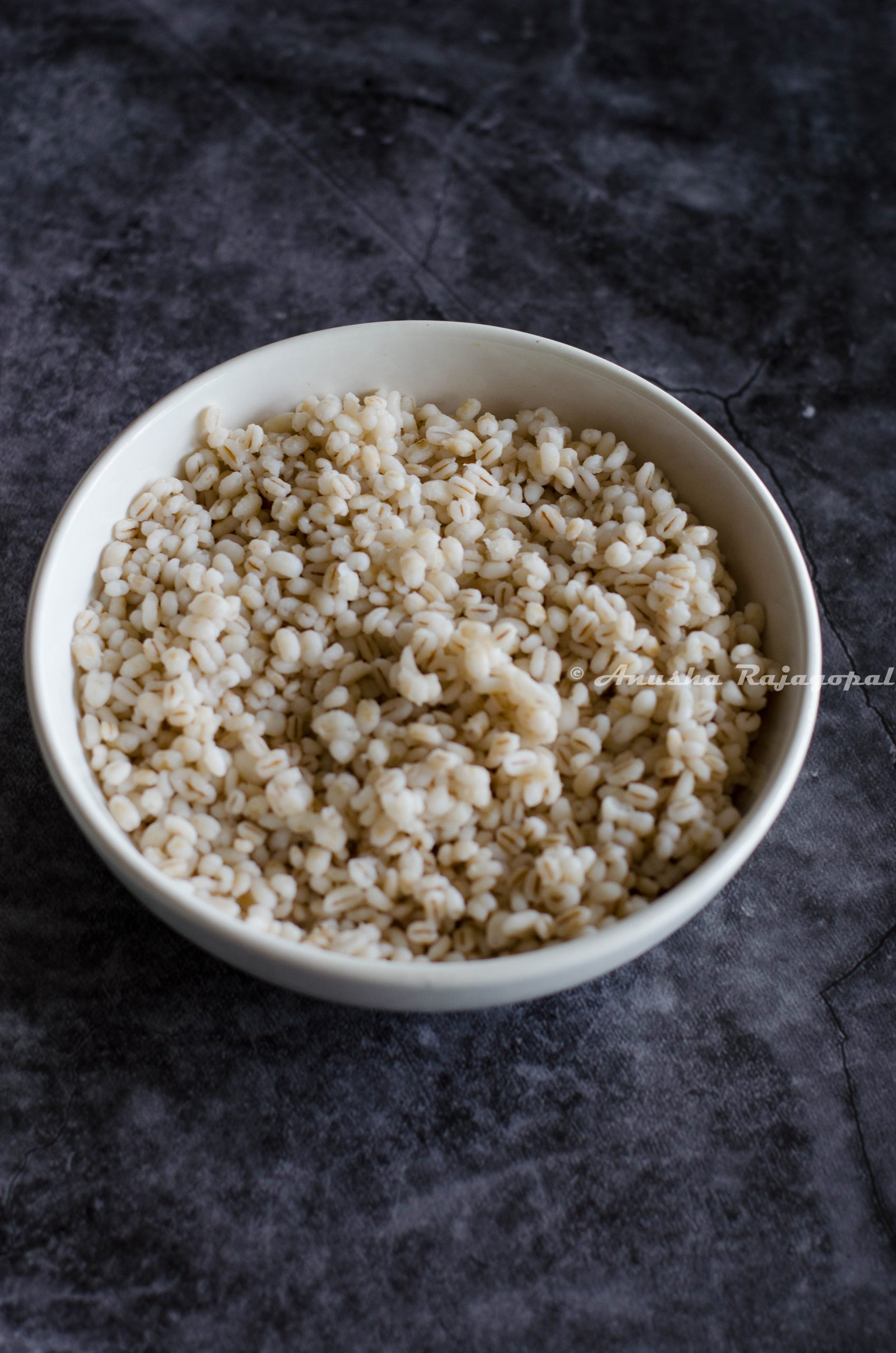 Do you need to soak pearl barley before cooking?

How to use barley?

Barley can be used as a replacement for millet or rice in your daily diet. One of its biggest plus is that it is high in fiber. You can also use cooked barley in salads.

Other than this, you can add barley to soups. However, please note that you need not cook barley beforehand while adding to soups.

Can I use other types of barley in this recipe?

Follow me on Instagram or Facebook for regular cooking updates and short videos. Find us on Pinterest for delicious content. Tried cooking Instant Pot Barley? We value your thoughts and comments! Leave a comment and tell us how it worked for you. Email us your questions to anusapraj@gmail.com if you need any guidance in making this. 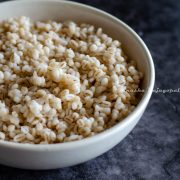