Note: This post was originally published in August 2011. This is an updated version that includes video. Raw mango sweet pachadi, a spicy, hot and sour relish made with the season’s first raw mangoes is a must on Tamil New Year’s day. This pachadi that combines the sour mango with jaggery, chilies and salt is a great accompaniment to sambar rice or curd rice.
We enjoy this raw mango sweet pachadi the most with some creamy curd rice. I make this pachadi quite often once the raw mangoes begin to appear in the market.
This stays well in the fridge for a week so i usually make a large batch and store it. We then consume this raw mango pachadi in every way imaginable, ranging from using it to smear on chapatis or as an accompaniment to curd rice.

Spice Powders In This Recipe

Every household in Tamil Nadu has its own version of the Raw mango pachadi. Some people add sambar powder while some prefer adding just regular chili powder.
You can add either of the two or even try making this recipe using fresh green chili.
Adjust the level of spice based on how sour the mango is and your palates.

These lend a beautiful flavor to this recipe. And i wont recommend skipping them. Not only do they add to the flavor but the benefits of neem flowers are numerous.
Dried neem flowers help in improving digestion and your gut health in general.

The color of this raw mango pachadi will be anything from dark brown to a light golden brown depending on the jaggery you use.
This is the reason you see a darker brown pachadi in the video and a lighter one in the pictures here.
Both versions were made on different days and hence the color difference.

If you are looking for more raw mango recipes, then do check out our 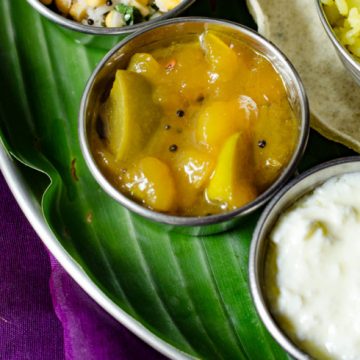 Tried this recipe?Mention @tomatoblues or tag #tomatoblues!
Pin This RecipePin this recipe and save for later
« Potato Curry
mixed veggie stuffed parathas »