Before i begin my post on these uber delicious gluten free vegan buckwheat flour pancakes, let’s discuss this buckwheat thingy, ok? Okay. Buckwheat is called as kuttu in hindi and Papparai in Tamil. Even though it reads buckWHEAT, it is no way related to wheat. It is a gluten free and is a psuedocereal like amaranth and quinoa seeds. Technically, the buckwheat that is used in the west is different from that which is used in the eastern side even though they belong to the same family. Buckwheat is a celiac- friendly food that can easily be used to substitute wheat based recipes. The kuttu ki poori is a popular dish in the northern and central India. This is a deep fried flat bread made with buckwheat flour and potatoes. I recently bought a packet of buckwheat flour to experiment with a couple of recipes other than that kuttu ki poori. I whipped up these delicious pancakes one morning for breakfast and served it up with some mixed berry compote. The result was a very happy Lil A and needless to say, a happy mom. These gluten free vegan buckwheat pancakes use almond milk, banana puree and a generous amount of cinnamon for the flavor. You can experiment with flavors of your choice. I replaced the egg with flax egg and this added a rustic chewy feel to these pancakes. 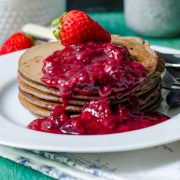