How To Make Aloo Jeera Or Jeera Aloo? Aloo jeera or Jeera Aloo- it doesn’t matter how you want to call it. But this everyday Indian potato curry is as ubiquitous as your breakfast toast in India. No Indian in his right senses would say no to a bowl of dal, hot rice and aloo jeera. You get my point, don’t you? Now this is such a popular dish that there really is no one way to make aloo jeera. Every family, every household or probably every woman has her own way of making this. I m just here to share my way of making  jeera aloo today. Now, this curry is so versatile that you can eat it with anything ranging from rice to roti to bread. But my best bet would be hot chapatis fresh off the tawa and a bowl of this cumin scented potatoes. Oh, did i mention ghee? Yes, there has to be ghee when there is chapati and some  jeera aloo…hmmmmm…my tongue is already singing. Off to the recipe, ok? Okay. 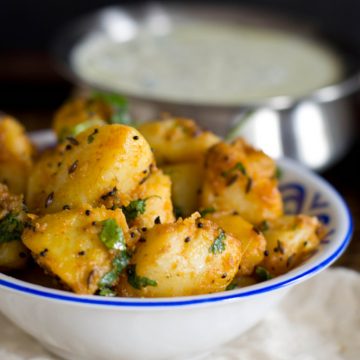 Tried this recipe?Mention @tomatoblues or tag #tomatoblues!
Pin This RecipePin this recipe and save for later
« Bombay Sandwich Recipe
Gujarati Kadhi Recipe »