Before i tell you all what is this dragon fruit smoothie bowl, let me talk about a smoothie bowl first. Okay? So, this smoothie bowl is kind of a food trend that became viral somewhere by the beginning of 2014 on instagram. Suddenly it seemed like people were really just not content drinking a glass of smoothie. They wanted more. I really dont know who started it. But then it began and i must say it is such a brilliant idea. So what exactly is a smoothie bowl? Well, it is a really thick smoothie that is poured into a bowl and topped with your choice of fruits , nuts and seeds. The most common toppings are chia, pepita, sunflower seeds, nuts and sliced fruits. Many add berries for a splash of color. But the smoothie bowl has come a long way since then and nothing really surprises me if it is a smoothie bowl. People add everything that is considered a super food to their smoothie bowls and this falls between the ranges of spirulina powder to maca powder. The basic concept of a smoothie bowl is that you eat it with a spoon and not drink it with a straw. That is it. From there on, you can let your imagination go wild and experiment with a number of fruits and other ingredients. This dragon fruit smoothie bowl is my first smoothie bowl recipe here on the blog. I admit. I am a smoothie bowl addict. Because it is so convenient to just blitz up a couple of my favorite fruits in the blender, sprinkle whatever comes into my mind over the bowl of smoothie and begin digging in. Mr. P never eats breakfast at home and i m not a person who ll make the effort to make an elaborate breakfast for me. And so, smoothie bowls come to the rescue. So, we ll get on with our dragon fruit smoothie bowl here, shall we? 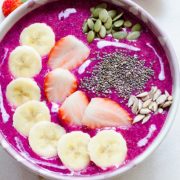