How To Make Chili Potato, an Indo-Chinese starter recipe with Potatoes? Chili Potato With Honey And Sesame is a Indo-Chinese starter recipe that uses an assortment of sauces, honey and sesame for cooking potatoes. I first tasted this Chili Potato with honey and sesame in a dhaba near my college in Bangalore. For the uninitiated, a dhaba is an eatery that is located on the outskirts of any Indian city. A punjabi dhaba in particular serves iconic aloo parathas dripping in butter and probably the world’s best rajma masala. But this chili potato with honey and sesame has nothing to do with punjabi dhabas or the parathas. It is simply a dish that we, a group of four girls, always ordered and relished whenever we went to this dhaba near our college. The original recipe doesn’t have either honey or sesame. What it did have was lots of fried onions which made up for most of the plate of chili potato that we ordered. I tried to improvise on that greasy onion laden chili potato and came up with this lip smacking recipe for chili potato with honey and sesame. While it may seem weird to add honey to potatoes, i believe the best part about this recipe is the honey itself. The sesame seeds add a nice crunch and the sauces that are added gives a burst of flavors to this Chili Potato with honey and sesame recipe. Recipe For Chili Potato With Honey And Sesame 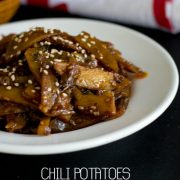 Chili Potato With Honey And Sesame

1. Do not skip dunking the potatoes in ice cold water. If you do, the potatoes will stick to each other after frying.
Tried this recipe?Mention @tomatoblues or tag #tomatoblues!
« Keerai Masiyal With Garlic
Vazhakai Kola Urundai Recipe »